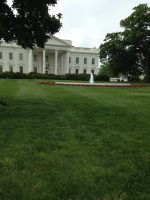 Visiting Washington, D.C. can startle me. People empty the Metro to fill the streets. They carry briefcases, messenger bags, purses, paper bags and wear suits, ties, jeans, short skirts, tall boots, torn sneakers. Many are quiet, some heads move to songs or voices piped into ears slightly deafened by the volume needed to cover city sounds. Some debate public policy in terse, political terms. And others just move with the flow of cars and buses and their fellow commuters.

Each trip I stand in front of the White House like a poor relative who will never be asked inside. It’s enough to know that 1600 Pennsylvania Avenue belongs to the big family called America, but I want to walk through its doors. We almost made it this time except transition logistics of a new dweller cancelled all unimportant visitors.

For the first time the Vietnam Memorial Wall did not rip away the healing bandage of decades. Maybe it was school children moving respectfully along the path. Even their teachers were too young to feel how this war tore apart America, but their steps become quieter, their eyes looking for the end of this list of thousands of names of men and women lost in a small country far away.

On this February day that felt like June, kind strangers gifted us with tickets for the National Museum of 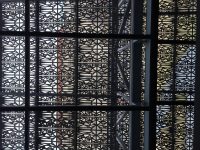 African American History and Culture. Beginning below ground we walked one mile through the history of slavery, reconstruction, segregation and civil rights. It was a walk heavy with emotions. Like the National Museum of the American Indian, truth stares back at visitors about others have denied their part of the American dream. What is there to celebrate about the largest forced migration of a people, the eradication of tribal nations, the shameful denial of freedom because of skin color?

Schoolbooks don’t really texturize colonization, treaties, wars, slavery, Western expansion, the building of railroads, the internment of citizens, the gulf between those who own the wealth and the majority who work hard for their daily bread. We all need to see the chains, manacles, bars, whips used by our founders and hear the words of those who suffered. Who still suffer.

I never return home from here quite the same. The art galleries are filled with portraits of the privileged. The memorials and national museums tell the stories of the rest of us. Words of President Obama’s final speech whisper in a city where legislators fight around the clock: “It falls to each of us to be those anxious, jealous guardians of our democracy. To embrace the joyous task we’ve been given to continually try to improve this great nation of ours.”