Amsterdam is a large airport, busy even at six thirty Sunday morning. Like many European 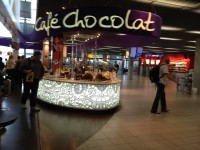 airports it has transfer centers where passengers can check on their next flight or make changes to their reservations. It’s a good idea that would make more airports in the Untied States friendlier to visitors.

The KLM 330 empties hundreds of people journeying from Minneapolis to the cities and countryside’s of Scandinavia, Europe or beyond. Young people with more dreams than goods, parents nervous about shepherding kids through other countries with limited language skills, business people carrying the universal black packs stuffed with laptops and binders. I might be one of the older people on the flight making my way to Copenhagen where I’ll meet my niece for days of sightseeing.

Traveling out of my comfort zone triggers creativity and words– a small poem in a notebook carried in my purse, a short story about my grandfather on a legal pad, a character sketch on the iPad. Each sense is tuned to unknown stimulus. How to create a character from the Frenchman next to me in economy seats who devoured Dan Brown’s latest book during the eight-hour flight then left it on the seat. He offered it to me, but I am already traveling with more luggage than I want to carry including a book in hand and two ebooks. Wondering what language the man three rows back mutters during numerous visits from the crew that earned him a new seat mate for the second half of the trip, a tall man in a dark sport jacket and khaki slacks who said nothing. Trying to decipher the smells along the canals outside the hotel. Enjoying the undertones in the ice cream bought from a vendor along the walk.

The cabbie, a recent Turkish immigrant, spoke little English. The hotel staff moves from English to Danish and French or German. I listen for the little French or German I remember from relatives. The Danish words are difficult to tackle and I want to be independent, not so American. But then the glorious Sunday afternoon sun makes the waterways sparkle, people move along with weekend laziness, the server tells a small joke about the man playing violin for spare change and I am a world away from home in a good way.

Truly transferred to the land of natural blondes, thousands of kroners, and dozens of hours of sun.