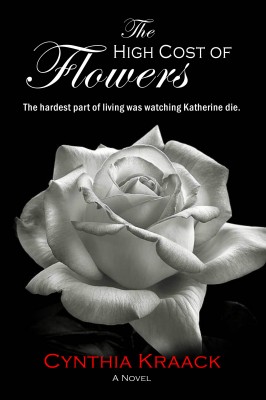 The fifth novel by Cynthia Kraack, The High Cost of Flowers is contemporary fiction about contemporary life. Continuing her tradition of studying what binds and strains within families, the Kempers are compelling characters not unlike those in books by Anita Shreve, Louise Erdrich or Sue Miller. The High Cost of Flowers is an American story as classic as suburbs, working parents struggling to raise decent kids and multi-generational confrontation.

The High Cost of Flowers, winner of 2014 Midwest Book Awards in the separate categories of Literary Fiction and Contemporary Fiction, by Mendota Heights author Cynthia Kraack opens the conversation through multiple generations of a fictional Minnesota family.  Katherine Kemper’s world continues to shrink as vascular dementia claims her memory and congestive heart failure weakens her body. The impact on her husband and adult children colors many aspects of their daily lives.

This is Kraack’s fifth novel, but first literary. The High Cost of Flowers is a contemporary American family story where an insufficient healthcare delivery system offers little relief for an elderly spouse reluctant to lose the companionship of his loved one, or their children sandwiched between emotions and obligations.

“So many people in our neighborhoods and workplace carry the emotional burden of making decisions about a family member requiring more and more care,” said Kraack. “There’s never enough time and frequently not enough financial resources. With smaller families living across multiple states, there’s just not enough of anything to fill the well.”

The High Cost of Flowers began while Kraack supported her own father in caring for her mother after a series of strokes. “The devotion to his wife displayed by character Art Kemper was modeled on the best of my father who managed to honor my mother’s desire to stay home until she passed. I’m not a healthcare professional or representative of any dementia-related organization, but I am the only member of my family still alive after a difficult decade. Waiting until a memory impairment challenge touches your family is too late. Sandwich is a gentle word for how the Millennial, who are starting their families later, will feel when the dementia epidemic swamps their parents’ generation.”