Snow is piled higher than my shoulders along our front walk. The seven-foot wide path has shrunk by almost half. Ten more inches of snow need to be moved. With a husband hobbling about on crutches, the shovel is all mine.

This front walk had been mine to shovel for decades as his workweek typically started on an airplane versus city streets. The key word in that sentence is ‘decades’ because the twenty-something who moved into this house now has a thirty-something daughter and a month-old grandchild. Sure I lift weights and work out with a trainer, but for some loftier purpose than flinging concrete snow on a dark February night. 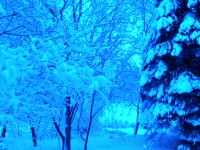 Not one neighbor was out this morning as I took my third swipe at the job. Minnesota has more snow than Sochi and a whole lot less reason to horde the stuff. A tree branch cracked then fell across the street. I returned to the garage for a different shovel, a lifter versus pusher. In the still dark hour the trees, branches covered by ice and snow, move with the same wind that is blowing snow back on the partially cleared walk. They creak and groan. Like I will later this day.

YouTube has 7,880 videos on snow shoveling technique. If the sight of new snow on the walk with banks piled higher than my shoulders brings uncivilized words to mind, the very thought that almost eight thousand people have taken the time to shoot a little video about shoveling leaves me speechless.