Urban shoppers might walk away from farmers’ markets in the rural area where I grew up. There’s 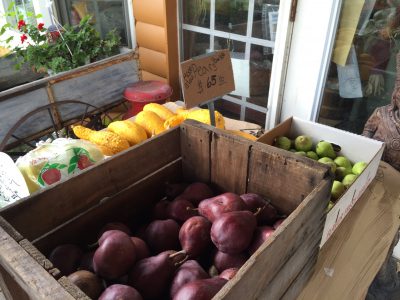 nothing exotic among the produce displayed. Tomatoes look like those ripening on a backyard vine. A dozen green peppers, as many red, and a handful of orange are the choices today. Big onions with dirt still clinging to the skins wait next to baby red potatoes. For fruit lovers there is a bin of large red pears, apricots, baskets of plums. The first of the new apple crop waits in plastic bags on large flat tables. They are costly, but will be in pies all over the county this weekend.

My grandfather worked a half-acre garden, berry patch and fruit trees, to feed his five children and wife. Potatoes, carrots and onions filled the winter fruit cellar. Tomatoes, peas, beans, corn, cabbage, cucumbers and fruit were canned. Into his nineties he spent time in his garden daily during the growing season. Family or friends could stop for a visit and leave with cabbage and a sack of potatoes.

Feeding his family was tough. While holding a job working the on the railroad during the Depression, my grandfather liked to end his day at a local tavern. He had a reputation for losing his way home in a very small town.

My step-grandmother raised chickens and baked bread. He hunted and they canned venison stew, rabbit stew, wild turkey with gravy. Hams he earned by working weekends on his brother’s farm dried in the attic with other meat stored in the town’s cold locker. His family ate decently because of what they could put away during the good times. And there were plenty of bad times when dinner was bread fried in bacon grease. My father found it hard to forget or forgive those years. 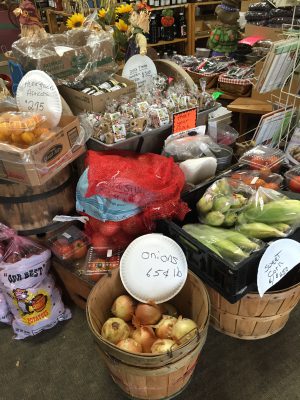 Buying sweet corn in my car at a farmer’s stand, I saw a handsome old man getting down from a tractor. He wore faded jeans, a long-sleeve shirt tucked into a belt circling a slim waist. Turning, he smiled at me and touched his forehead, a gesture I remember in the good memories of my childhood. He winked as he walked past. Blue eyes in a tanned face topped by thick white hair. Not quite fifty miles from my grandfather’s original home, this man could possibly be a relative.

Twenty years ago a priest delivered my grandfather’s eulogy. He spoke of the kindly old man who loved to be surrounded by children, about the cardboard boxes of produce left at people’s door when they most needed help, about a person I hardly knew. My father moved us away from our hometown when his father’s reputation followed us into grade school. My grandfather was still working, still drinking.

I didn’t get to know the man the priest described. The man who remarried a kindly woman and changed the way he approached the world. Through the last three decades of his life, my grandfather became a man who would be missed. Knowing of his evolution made a deep impression in me, one that often drifts into my writing.

Another revelation on a quiet September day.