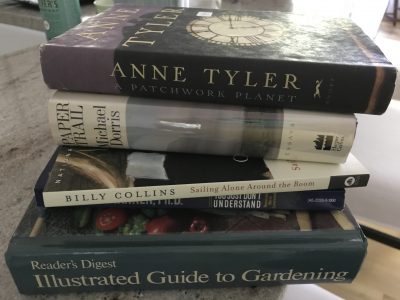 Under my desk a hardbound copy of Ken Follett’s Edge of Eternity acts as the perfect footrest. The first two volumes of The Century Trilogy were placed in the hands of other readers, but the Edge of Eternity replaced Bill Clinton’s My Life when a friend asked for that biography.

Jodi Picoult dominated one of the seven shelves of books in my office until some of her titles were rotated to guest rooms or the basement bookcase. Phillipa Gregory had been sent to my mother-in-law to be shared among her Indiana reading group.

Some authors are like Facebook friends who post about a puppy, a grandchild, a new writing project, a spectacular vacation then disappear for months. I trust a short list of these writers with my time and attention without a lot more expectations. When they have a new release I’ll invest in the real thing, a hardcover or paperback, not an e-book. If I’m disappointed I’ll give them another chance to regain their favorite reads position. And if one of them passes, I feel sad that their voice is gone.

At this time of the year when purging season is high I admit that books by these three have been shuffled into a bag for recycling at The Peninsula Bookman. Peter Sloma has customers who look for these popular names. It’s a fair trade. I get store credit to shop and my books go home with happy readers.

Except for Edge of Eternity, which is just the right height for when I’m sitting up straight and working on my own writing. It might be time for Fall of Giants to give up its shelf space, but not its nice hardbound friend under my feet.