A Room of Her Own Foundation is dedicated to helping women artists achieve the privacy and financial support necessary to pursue their art. For a handful of very fortunate women AHOHO’s 6th Gift of Freedom Award has provided $50,000 to make that possible. Recently they asked me to complete a survey about my life as a woman writer. Their goal is to collect 50,000 completed surveys and gain insights into how creative women think about their work, opportunities and obstacles. 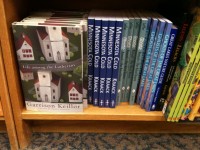 The whole concept of how gender impacts my success as a writer is a topic I try to ignore. Looking at the bestselling authors of 2011, eight men and five women are at the top. Genre literature trumps the group.  The fifteen top selling writers of all times list has almost the same break down with nine males and six females. William Shakespeare and Agatha Christie share top honors followed by Barbara Cartland. Again, writers of genre literature dominate.

What role does gender play in the marketplace? Research by Bowker describes the typical book buyer in the United States as a 42 year old woman. Women make 64% of all book purchases. The numbers look fairly consistent across e-books.  Shouldn’t the domination of female buyers give female writers a break?

VIDA’s 2011 reporting on women in literature paints a dreary answer to that question. Across the elite publications reviewing books and writing about literature, men outnumber women on editorial boards, as book reviewers and as authors of books reviewed. The numbers are not insignificant. Usually the ratio is at least three to one. So women may be writing damn fine books, but it appears that the main voices in the marketplace are making other decisions about what should be reviewed and read.  In Mother Jones, celebrated poet Erin Beleiu of VIDA said, “A friend of mine defines this kind of intellectual segregation as the “tits and nether bits” ghetto, a place in which women only speak to other women. Meantime, men are allowed and encouraged to speak to whomever they want.”

I don’t really want to end this train of thought on Beleiu’s quote, but at the moment I can’t think of one thing to write in response.  As I work diligently on submissions to smaller publications than VIDA studied, AROHO diverted my attention to a bigger subject. Now I wonder why they are asking women in the emerging phase of their careers if their gender has affected reception of their work in the marketplace. Isn’t the answer documented?