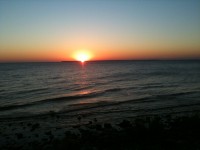 If you claim to be in the arts and ignore the force of social media you can only stand to lose some possibility with that decision. Unlike an ad in your local newspaper or a poster pinned up behind the indie bookseller’s computer, online news about music and movies and books might be viewed by someone who lives on the other side of your town, your country, or the world.

Everyone is hurrying to blog or twitter, but this week I’ve been focusing on YouTube while creating the first in a series of book trailers in advance of the release of Harvesting Ashwood: Minnesota 2037. All the word work of writing must be captured in images and music. After proofing galleys and working on press materials, the trailer is a welcome opportunity to spend hours looking at pictures and videos while listening to many kinds of music. Between flipping through personal photos, free online sources, and places like iStockPhoto, days can slip away. Even knowing my own work, this visual process has revealed ways to think about the people and stories in Harvesting Ashwood. A former writing coach encouraged casting a book with actors as a way to develop realistic characters, but this is a deeper process than choosing Tom Selleck instead of Sam Shepard as a grandfatherly figure.

Of course the trailer is one part of a bigger marketing campaign assigned the task of attracting viewers in the crazy world of YouTube. Thirty to forty-five seconds with images changing frequently is not a lot of time to summarize 90,000 words. Since 20% of viewers click away in the first ten seconds and another 13% are gone by twenty seconds, the book trailer is not the place for a talking head (unless you have connection to someone like Stephen Colbert or Bono).

With Windows Live Movie Maker, it is possible to build and pull apart multiple projects. The final result will not in any way resemble the incredible “The Girl with the Dragon Tattoo” trailers, but my budget is less than what that production company probably spent on masking tape. My intention is to capture the attention of a few hundred people over the next eight weeks. What I figured out about Harvesting Ashwood while working on the series is a gift that will carry into the final book in the trilogy.

Watch for the first trailer the week of April 9. Think about building a trailer for your next creative project. It’s a good way to think out of the box about your own work.